One point five minutes ago I had a flashback. I refuse to google it to see if it's true, or if I imagined the whole thing. I think I don't really care either way.

The year was… 1992? 1993? I was playing the hit arcade game NBA Jam. A lot. I remember playing NBA Jam a lot. At the time the NBA was huge where I lived. I spent uncountable weekends delivering newspapers so I could blow it all on a pair of Jordan 5s, and let me tell you - I loved those shoes.

Anyway, one day I was at the local bowling-alley arcade with a friend. We'd heard a rumour that you could use whipper-snipper (weed eater/weedwacker in other countries) wire - bend it into a square shape that had edges the same radius as a coin - and push it into the coin slot of arcade machines to get free credits.

After an hour or so we concluded that it wasn't true at all. We reverted to real money.

Buuut, also, someone else had also told us about a new cheat code for NBA Jam! Of course everyone knew the "Big Head" cheats (a cousin's friend's cousin's friend told me about that one), but apparently there was another better one. A very elaborate one. One that would trigger a whole new game!

We were just kids, but even we were sure that sounded like rubbish.

It turned it wasn't rubbish and I'm 80% sure I actually saw it work for real (again, I refuse to google it).

So, you were supposed to put in your coins, then do the cheat code before the game started. The joystick/button sequence was elaborate, and we failed it many many times. We'd all-but given up on it when suddenly, unexpectedly, the screen went blank.

Instead of NBA Jam, there was something else: a 3D tank game! It kind of looked like the old Battlezone game, but with filled polygons instead of wireframe models. You could control the tanks and shoot projectiles. The rules of the game were unclear - and we died pretty quickly.

I'm not sure if this next bit is true, but I seem to remember we actually lost the credits to play NBA Jam by starting the tank game. Like, we played the stupid 3D tank game, then we died, then it just said "insert coins to play NBA Jam".

It was a boring 3D tank game, and 3D sucked then even more then than it does now - so we never tried the cheat again. But I tell you, wow it was it exciting when it worked for the first time!

Ever since that day, anytime I've heard a crazy rumour about how something works, I've given it a go (or two, or three) just to see if turns out to be another NBA Jam Tank Mode. I've also hidden easter eggs in everything I've touched. Easter eggs are life.

The following is an account of my embarrassing ignorance on color spaces, gamma correction, and pretty-much everything to do with how a computer outputs things to a monitor.

Recently I've been kicking around an idea for probably the greatest retro-video-game game of all time. I'm 40% sure it will be amazing and spawn a whole new genre of games. I'm also 60% sure it will be not as fun as I imagine, so I thought I'd better test it out first.

As part of prototyping I made some placeholder models in Blender. I added textures to a couple of the models, but - in the interests of saving time - assigned simple solid colors for the rest. 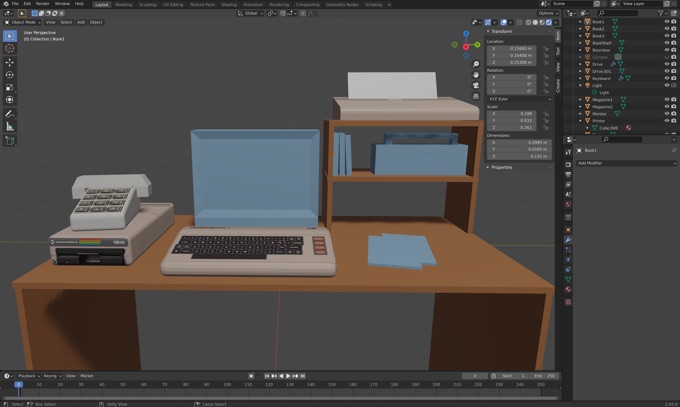 Next I exported the file as an .obj file and wrote a parser to read the vertex data and materials. These could then be displayed in the browser using WebGL2, as seen in the screen shot below.

Everything (except for the crazy PETSCII background and the C64 computer display) is rendered using a single vertex shader and a single fragment shader. 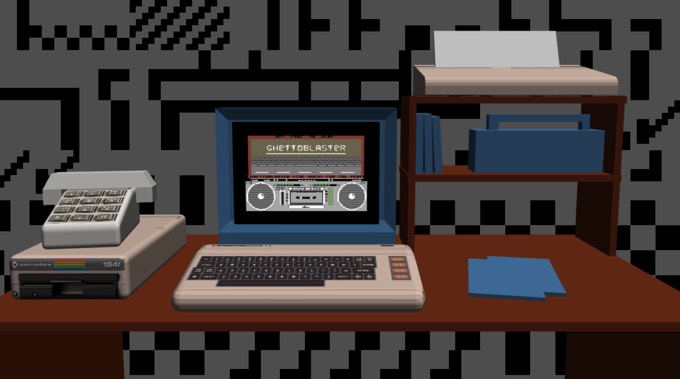 With the scene-renderer working ~fine~ (well, considering the limited amount of work I put into the shaders) it was time to move on to the game logic... but something was bugging me.

Note to self: Math.hypot() still exists

C'mon Mr Speaker, stop re-writing your "distance" function every project... Math.hypot() has been around for ages now!

(So has Math.SQRT2. I also forgot I already remembered and re-forgot that)

Years ago I had a genius idea of making a USB-powered mini shawarma machine that you could have on your desk, and shave off bits of meat during the day. Sometimes I still lay awake at night, wondering if that would have worked.

When I de-bloated my piece of the web, I noted that the largest asset I was serving on my blog was a local version of jQuery - coming in at some 70+ kilobytes - that "I still need to insert into the head of my page for historical reasons: 15 years ago I in-lined lots of my wacky JavaScript experiments".

But things change: we are now in the middle of a bloat-a-demic. Web sites are tracking and expanding far beyond sustainable levels... and emergency measures must be taken.

So I have done the unthinkable. I have pulled the plug on JavaScript on my blog. All of it. Now the total number of network requests (not counting any images inside of posts) comes in at six (6):

And `mrman.jpg` and `mrman-up.jpg` are the same image, flipped vertically - so I should certainly lose one of them. 1.5k for a favicon seems a bit hefty - I should check that. And I did some more tweaking of my old php software and made the html output prettier and leaner, but I'm sure there's more to improve in there too.

Naturally, "no scripts" means my wacky JavaScript experiments have been killed dead… and that simply can not stand. I'll commence the long process of de-jquery-fying them and making them run stand-alone (mostly they were just using JQuery for the `$(document).ready` anyways).

But it feels pretty good to go cruft-free. Having dropped the kilobytes (down originally from around 5Mb (!) to around 200k for a full page of posts) I feel like a whole new webmaster. A giant weight has been lifted.

Until the next big web trend comes along, of course.

Monads for Babies is the first in a series that teaches computer science to toddlers. It's only available in digital form at the moment (png format, embedded below), so I suggest `right-click -> print` so you can read it to the lil' tigers at bed time: 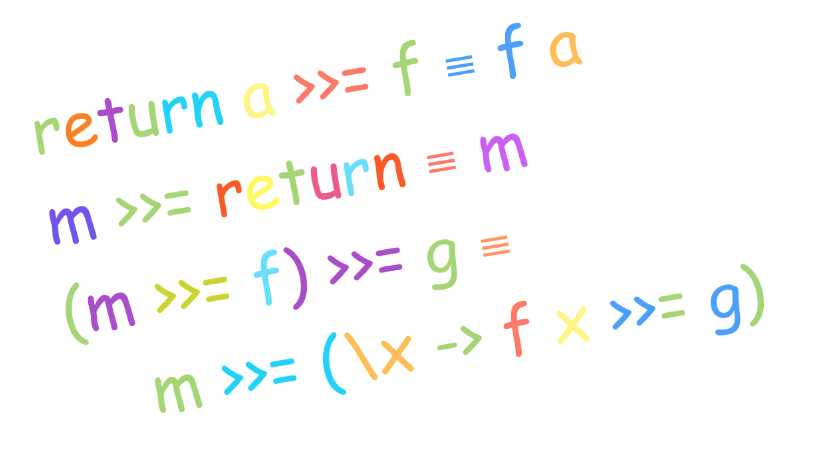 Support my Patreon if you'd like to see more.

A most useful function

Hot on the heels of my web colors rant, comes this amazing piece of Emacs Lisp I now have in my init file:

Calling it with `M-x w-c` (from anywhere you care to type things) injects a random entry - so you get a wonderful rainbow of weird names, instead of forgetting them all every time and just choosing "lemonchiffon".

Debugging has never looked so good.

"Name as many of the web 'X11 color set' named colours as you can." should be the new fizz buzz. I think I'd do pretty good, but would always fall down on the "mediums" and "lights". "MediumPapayaWhip? LightRosyBrown?".

If it were in an interview situation, I could talk for hours about the faded glory of LemonChiffon, the unexpected practicality of PeachPuff, the eerie strangeness of Thistle, and the deep beauty of Orchid (way better than MediumOrchid, which I'm pretty sure is one of the mediums).

But I'd be praying they don't ask my opinion on Olive and OliveDrab.

Olive is way more drab than OliveDrab. It's drabber. There's no competition. If I showed you you'd 100% agree, but I categorically refuse to put the drabby drabby drabness that is "Olive" on this website. I JUST WON'T DO IT! OliveDrab should be renamed to OliveFestive or something, and I'm not moving until it had been changed in the CSS specification, and maybe even added to as as the honorary 17th named color in the HTML4 specification.

Well, nah, maybe it's not that good. And it is a bit drab I suppose. But drabber than Olive?!

Anyways, did I get the job?

Thanks to a decreased demand in shaving recently, I discovered several grey facial hairs. It's happening - I'm becoming a graybeard!

The timing is suspicious: I start using Emacs, I turn into a graybeard.

But did Emacs cause me to get grey hairs, or did the hairs coerce me into to using Emacs?