Eight minutes ago I had a flashback. The following is my stream-of-consciousness account of those eight minutes. I refuse to google it to see if it's true, or if I imagined the whole thing. 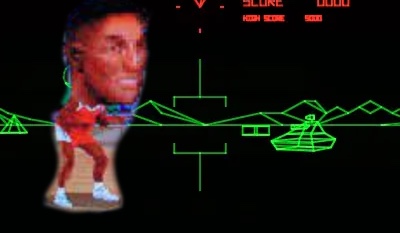 The year was… 1992? 1993? I was playing the hit arcade game NBA Jam. A lot. I remember playing NBA Jam a lot. At the time the NBA was huge where I lived. I spent uncountable weekends delivering newspapers so I could blow it all on a pair of Jordan 5s, and let me tell you - I loved those shoes.

Anyway, one day I was at the local bowling-alley arcade with a friend. We'd heard a rumour that you could use whipper-snipper (weed eater/weedwacker in other countries) wire - bend it into a square shape that had edges the same radius as a coin - and push it into the coin slot of arcade machines to get free credits.

After an hour or so we concluded that it wasn't true at all. We reverted to real money.

Buuut, also, someone else had also told us about a new cheat code for NBA Jam! Of course everyone knew the "Big Head" cheats (a cousin's friend's cousin's friend told me about that one), but apparently there was another better one. A very elaborate one. One that would trigger a whole new game!

We were just kids, but even we were sure that sounded like rubbish.

It turned it wasn't rubbish and I'm 80% sure I actually saw it work for real (again, I refuse to google it).

So, you were supposed to put in your coins, then do the cheat code before the game started. The joystick/button sequence was elaborate, and we failed it many many times. We'd all-but given up on it when suddenly, unexpectedly, the screen went blank.

Instead of NBA Jam, there was something else: a 3D tank game! It kind of looked like the old Battlezone game, but with filled polygons instead of wireframe models. You could control the tanks and shoot projectiles. The rules of the game were unclear - and we died pretty quickly.

I'm not sure if this next bit is true, but I seem to remember we actually lost the credits to play NBA Jam by starting the tank game. Like, we played the stupid 3D tank game, then we died, then it just said "insert coins to play NBA Jam".

It was a boring 3D tank game, and 3D sucked then even more then than it does now - so we never tried the cheat again. But I tell you, wow it was it exciting when it worked for the first time! How did this secret information manage to reach the remote suburb of my childhood?!

Ever since that day, anytime I've heard a crazy rumour about how something works, I've given it a go (or two, or three) just to see if turns out to be another NBA Jam Tank Mode. (I've also hidden easter eggs in everything I've touched. Easter eggs are life.)

This was written by Mr Speaker. Posted on at 11:02 pm. Filed under Game, The common man, Wide world. Bookmark the permalink. Follow comments here with the RSS feed. Trackbacks are closed, but you can post a comment.