Not so late breaking News: Read out how 'n' why Boony is Back from the Dead!

In an effort to get to the bottom of the Boony mystery I have started the Facts Of Boon page and the Reverse Boonjaneering Project. Please contribute all you can to these noble causes. Or pledge your respect in our Homage to Talking Boony...Last update: 01 Sept 06, 9:17am

As a whipper snapper, David Boon was by far my favourite batsman. And even though he was um, plump, he was the fastest runner-between-wickets in the Australian side. That's pretty impressive. So when I learnt of the "Talking Boony" marketing ploy by VB, I had no choice but to ignore my taste buds and purchase a carton - I strolled out of the local bottle-o with a slab, a bubble-wrapped Boony statuette, and the instructional leaflet that accompanied him.

"How do I make it talk?", I thought to myself "And why would it be so difficult that I'd require an instructional leaflet?". The answer left me dumbfounded. Dumbfounded and incredulous.

Apparently, see, you put Talking Boony in your lounge room, near your TV. When you are watching the 2006 one-day series, he will respond to "audible signals" and add in relevant comments! "Audible signals"! This was amazing. In all my television watching and product buying days I'd never seen anything like it...

Talking Boony was whisked back to the laboratory for thorough analysis.

It became obvious that to figure out the mystery of the Boon, an autopsy would be necessary. However the leaflet clearly stated: "Do not unscrew the Talking Boony base. This will cause the unit to malfunction". It was certainly an ominous warning - it didn't say "it may malfunction" it said it WILL malfunction. I resisted pulling it apart...

...Resisted for about 10 minutes! Unscrewing the base revealed one thing - the only malfunction caused was that David Boone could now move independently of his base. The warning is a mere scare tactic aimed at those who've grown attached to their Boony.

Inside I found a circuit board with a microphone and speaker attached, as well as 3 AAA batteries. The circuit board has 4 microchips on it. It also has a big blob of black stuff, which I assume is there to hide a fifth chip that would contain all the Boony goodness.

I have no idea about the others. Maybe timer chips. Maybe.

We have ways of making you talk

As there was still a couple of weeks till the first one-dayer, I thought I'd see if I could get Boony to react to some "audible tones". I found a couple of simple tone generators on the internet, and subjected Boony to blips and buzzes in all frequency ranges (well, only from 20hz-20000hz as I can't imagine many people would have TVs that would actually transmit beyond that range)

Boony wasn't saying nothing. His will was strong.

Unfortunately for me, my patience is short. While trying to stuff the boony guts in to my suitcase for a pending flight, I dislodged a wire from the battery terminal. This was bad. Real bad. The instructional leaflet said Boony would be activated on the 13 of January 2006. That meant Boony knew what date it was (or at least, how many milliseconds he had to stay asleep for)

I reconnected the wire. But I had a sneaking suspicion I had just murdered David Boon.

It seemed like eternity, but the big day arrived. Sri Lanka vs Australia. Boony's time to shine.

But my Boony said nothing. Not a peep.

I got a text message from my mum saying "Our Boony just talked, and the cricket hasn't even started yet!" The Boonys were waking up all around Australia. 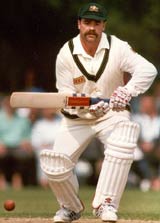 During the match there indeed were "audible tones". They sounded kind of like 2 modulated sine tones. Though it might just be my dodgy TV capture card that made is sound modulated. You can have a listen to a boon.wav file that was recorded by a couple of highly skilled, and strikingly beautiful assistants in the laboratory. Try playing it to Boony and see what he thinks.

It sounded like the same tone was played each time, so Boony just said stuff at random. From all accounts he says many hilarious things like "Get me a beer". And, "Isn't it funny that I'm an alcoholic?" or something.

Boony had surely won this epic battle against me. I am not sad. He was a formidable foe. And I know nothing of basic electronics. Things aren't as bad as they seem, either. My folks inform me that Talking Boony may be sold out in the eastern states, but Western Australia is weeks behind the rest of the country and will surely have Boonys available. My new and hopefully undead Boony should be here before game 2.

More updates, as they come to hand....

This was written by Mr Speaker. Posted on at 8:00 am. Filed under Pop. Bookmark the permalink. Follow comments here with the RSS feed. Post a comment or leave a trackback.