The Boony fun and games are over - no more playin' sound files at the little bugger - it's time to crack Da Boony Code. Presented here are the collected findings of people smarter than myself. It will hopefully culminate it the complete unravelling of the inner secrets of the mystical plastic batsman.

These projects aren't going to require a degree in electrical engineering - Tim's got that - and he'll tell us how to do this with just a soldering iron and a couple of bits picked up from Dick Smith. Though before we get soldering, a few warnings... 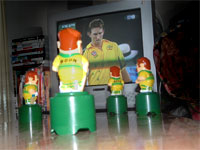 No responsibility will be taken for dead Boonies, burnt fingers and dead animals. (Though remember, "Boony Authority" has told us that your Boon will be dead after the ODI series anyway, so...)

Point 2: DO NOT REMOVE THE BATTERIES as Boony needs to know the time to work. Pulling out the batteries can confuse the poor fella. Hopefully this will help us extend Boonys life, but at this point its best to keep them in.

Point 3: I DONT KNOW ANYTHING ABOUT ELECTRONICS. So if you're worried, only follow Project 2 below, as that was designed by Tim - and he know bucket loads about electronics.

Point 4: If this is your first soldering efforts, do a lil' practice first - the Boony board is very small and you don't want to go shorting connections and turning it into Chucky Boon.

For this project we require two lengths of wire, and a female RCA plug. I just went to Jay Car and rummaged through the components until I found something that looked like the things on the back of my stereo. You might want to get a RCA lead while your here, so you can plug Boony in when we're done.

Right-o, lets go. Get the 2 wires and carefully solder them to two solder points that already exist on the speaker. It's a bit fiddly because of that great big lump of plastic the speaker is glued to.

Then solder the other ends of the wires to the two holes in the RCA plug. I'm not sure if there is positive and negative stuffs you need to think about. I didn't and my Boony is crackin' out his happy sayings to the world.

Project 2: See when Boony is awake

Tim is our strongest hope in the Quest for the Secrets of the Boon. He's presented this excellent tutorial on adding an LED that shows when a talk window is happening! Take it away Tim:

Connect some longish wires to the LED, so you can chuck it wherever you want. I suggest black for the cathode (shorter leg) and red for the anode (longer leg). You will need a series resistor for the LED to work. To install a RED LED, use a 560Î©. This will pull a little over 5mA. To use a BLUE LED use a 180Î© for the same current.

Remember, the more current you pull, the less time Boony will last.

Connect the cathode to the GROUND point (click on image above for diagram), and the anode (via a resistor) to the other point. Put the LED wherever you want, but make sure the wires do not touch (use electrical tape or something). Sit back and play the tones to Boony whenever he lights up! Solder the powerup points when he is not powered up, this way it should minimise the chances of causing damage to him.

Once you can see when Boonys awake, you don't want to have to find tones to play at him - luckily, once in a talk window you can connect a wire between the two points shown in the diagram - and he'll let you know what he has to say!

Better still; get two lengths of wire and a simple push button. Solder one piece of wire to each of the points, then join the other ends to the push button. When the talk window is open, press away!

Tim has provided this indepth run-down of whats going on: There is a local oscillator on the board (the cyllindrical thing soldered on the top of the board) that runs at 33,000 Hz. 5 mins is therefore 1,000,000 counts. If the reset switch is triggered, after this time the memory is read over and over, but I have not seen him do anything else.

During this initial time, the audio stage is powered up to allow for some programming to sync him to the current time. This makes sense as if there are a few thousand of these made, there would have to be a way to time them to the same time.

I have sped up time for one of my Boonys by removing the oscillator and connecting up my own micro (I personally hate PICs, I am using a Zilog Z8.) to speed him up. The initial time is now 25 seconds, but I haven't tried to send and programming in that time. I will try to send random 8bit numbers (the memory is an 8bit memory device) tonight and see what happens.

A normal working Boony will read the memory once, very quickly, every 5mins (or 1,000,000 counts). I have only tested this during a cricket game (my girlfriend won't let me fiddle with hers until after the season) so I will sneak hers in tonight and examine closer. I hope I don't stuff it up!!!

A re-powered Boony will powerup his audio stage for 1,000,000 counts upon release of the S1 connection. He won't speak during this time, but he is listening for something. After 1,000,000 counts, he powers down and reads the memory, but it doesn't look right. He seems to be repeating over and over, as if looking for something, like a start address.

What do you want Boony to do?

Tim has started designing a PCB to plug into Boony with various things like switches, light sensors, remote control receivers to activate him when he unlocks the Boony goodness. The question is... What do you want Boony to react to? One person wanted to get him to watch the cricket and respond to wether the ball was a boundary, wicket, dead ball etc... This is a bit hard as it involves image processing, but it sounds cool.

If you've got any other Boony projects, please let us know! Together we can save Talking Boony through Reverse Boonjaneering!

This was written by Mr Speaker. Posted on at 6:16 am. Filed under Pop. Bookmark the permalink. Follow comments here with the RSS feed. Post a comment or leave a trackback.