Mister Moonboots: on the App Store! 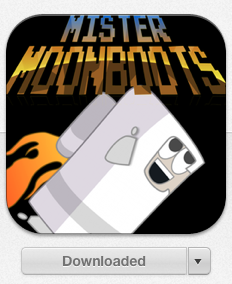 Bust out the champagne (or the chartreuse, if you're feeling game): Mister Moonboots has been released on the App Store! Rush and play it 3 times now, then go and rate it 5 stars (if you loved it) or 4 stars (if you're a heartless miser who wishes to suck all traces of joy from others).

Yes, finally one of my games is available behind a walled garden, and only accessible by a tiny percent of the gaming market! I'll never make a HTML5 game again! Nahhh... there's more than just a tiny pang of pride on my part though: one of my divine artworks has hurdled the very low barrier-to-entry that is the app store review process, and declared "releasable to the public". Sniff. I never thought I'd see the day.

Mister Moonboots itself has a relatively interesting history, that goes a little like this... Florence, Italy. On a tranquil holiday where - rather than take in the ancient and majestic local monuments - I chose to spend a day piss-farting around with a "make a game on your ipad" app. It was called GamePress, and I had apparently installed it at some point in the past.

On return to normal life, I investigated further and found they were running a game competition. First Prize? A shiny new PS4. I decided to polish up the game I had started - make a rocking theme track, and fancy-pants sound effects and submit it. And lo-and-behold, it took first place! A shiny new PS4 and a standalone version on the App store: the very version you went and installed and rated 5 stars at the beginning of this blog post. Coded 100% on the iPad itself. Like some kind of boring inception.

Hmm, wasn't that interesting after all. But still... GO PLAY IT!

This was written by Mr Speaker. Posted on at 1:01 am. Filed under Nerd. Bookmark the permalink. Follow comments here with the RSS feed. Trackbacks are closed, but you can post a comment.