[To coincide with the transcendent Paris DemoJS party, here is a repost of an article I wrote for the Powerhouse Museum as part of their "The 80s are back" exhibition.]

It’s 1985, and millions of Commodore 64 computers are connected to millions of television sets around the globe. The sole purpose of these 1-megahertz, 16-color marvels is simple. Games. No question about it – the C64 runs the coolest video games this side of the local arcade, but from the darkest corners of the home computing landscape oozes something new, something that few people will ever see. A curious and passionate computer subculture is forming that exists purely to push this humble machine to its very limits for the purposes of self-expression. 1985 sees the birth of the demoscene. 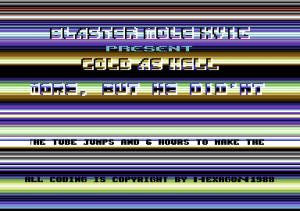 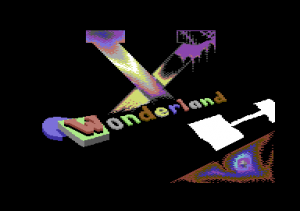 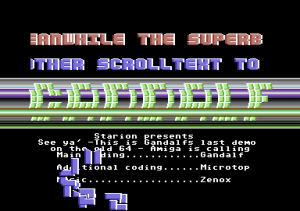 The demoscene (more commonly known as “the scene”) was made up of fiercely competitive groups of programmers, computer musicians, and computer graphics artist who collaborated to create real-time presentations called demos.

A demo doesn’t do anything – it’s just a collection of visual effects set to music – kind of like a bad 80’s music video where all the effects are generated on-the-fly via some hardcore maths and bags of technical wizardry. A demo had to look awesome, it had to sound awesome, and most importantly of all – it had to be technically astonishing, bordering on improbable. The demo was about making the machine do things it was never meant to do.

The scene itself emerged from the dodgy world of the “crackers” – people who would take commercial video games, remove the copy-protection schemes from them and then illegally release the copyable games to the public. Cracking games required expert programming skills – and the crackers where not shy about vaunting their talents via small messages that displayed while the game loaded.

Over time the introductions became more and more elaborate. The simple messages were replaced with flashy graphics, original 8-bit music scores, and impressive programming tricks – combined with scrolling text that praised the group’s allies and ridiculed their rivals: fueling the competitive spirit and raising the bar for computer-based design, music and technical accomplishments.

Eventually the demos expanded from small game ‘intros’ into epic standalone productions of art direction and mathematical genius that consumed entire floppy disks! As the culture spread, the best demo groups attained celebrity status. Huge parties were held where thousands of pasty nerds would gather from all around the world (but mostly Europe) to create demos and see their heros.

If you care to revisit the old Commodore 64 demos you’ll find a treasure-trove of poor grammar, juvenile sci-fi drawings, and seizure-inducing special effects. But the awesomeness of the demoscene laid in the spirit of pushing the home computer beyond imposed limitations and not for money, just to see what might be possible: making it an endeavour into the realms of pure art.

This was written by Mr Speaker. Posted on at 8:57 pm. Filed under Nerd. Bookmark the permalink. Follow comments here with the RSS feed. Trackbacks are closed, but you can post a comment.