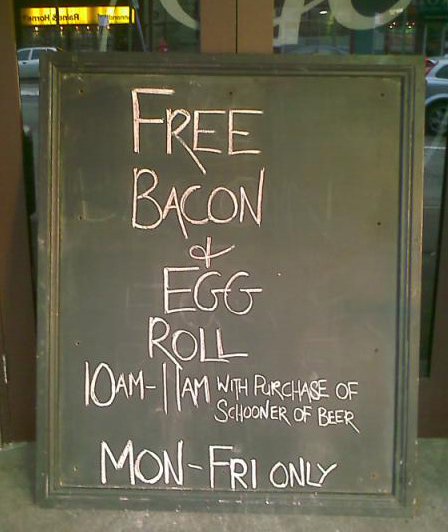 Ok people of the internet - The last challenge I threw down to you was conquered with relative ease, so here's a tougher one to ponder - from a local drinking establishment in Sydney's inner-west:

Condition 1: With purchase of schooner of beer.

Condition 2: Monday to Friday only.

Right. So the offer is: "We'll give you a free bacon & egg roll if you buy a beer in the sixty minutes following 10 in the morning, on a week day."

Therefore: some people who wanted a beer and bacon and egg roll on a weekday between 10.00am to 11.00am might be enticed away from their regular pub or bacon & egg roll shop, creating a competitive advantage.

Who is this marketing ploy targetting?!
And why for just a single hour?!

As it stands, it does not make sense. I'd like to hear what you have to say on the matter. Once we collect some wisdom of the masses I'll head to the pub on a weekday between 10 and 11am to order a beer and see who was closest.

This was written by Mr Speaker. Posted on at 10:47 am. Filed under Wide world. Bookmark the permalink. Follow comments here with the RSS feed. Post a comment or leave a trackback.