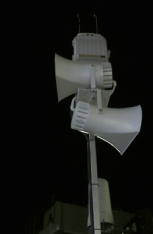 As part of the tour Mix-Master Johnny H has organised for a banging sound system to be set up throughout the city.

They haven't started cranking tunes out yet - though apparently there was some freakin' loud glitch-noise samples pumping out earlier - hopefully a sign of things to come!

Technically, it seems like a pretty snazzy set-up: two megaphone type speakers hooked up to an amp and wireless router, drawing power from traffic lights. I am soooo hoping that they turn out to be Leslie rotating speakers. Psychadelic!

To get the tunes around town there are two transmitter/receiver aerials on top of the amp boxes. These boxes transmit three secured Wi-Fi access points. The SSIDs are all similar, but I didn't take enough of a random-sample to determine a recurring pattern.

My phone wouldn't tell me if they are secured by WEP or WPA, but here's hoping it's WEP - it'd be cool to see someone stage their own after-party.

If you're around town with a suitable device, grab some more IDs and send them in - we'll see if we can nut-out the details. Also check to see if Johnny is sharing his iTunes library.

This was written by Mr Speaker. Posted on at 2:39 pm. Filed under Wide world. Bookmark the permalink. Follow comments here with the RSS feed. Post a comment or leave a trackback.