Epiphanic moments of genius are relatively rare. Especially for me. That's why I was kind of surprised to have one last Saturday night. It germinated while I waited for my change at the bar, and had blossomed into a fully-fledged revelation by the time I returned to my seat at the back of the room.

It began when I was charged with the mission of retrieving three beers; A Reschs for myself, a New for my friend, and a V.B. for a newly-met acquaintance at our table.

On the return journey I happened across a couple of friends I had not seen for some time. I sat at their table and had a brief "catch up", before remarking that I had been charged with a mission of retrieving three beers and had better conclude that mission with haste.

I picked up the bounty of beers and returned to my table. Then, without so much as a tinge of self-doubt, I gave the correct beers to the correct persons and we merrily drank up.

So, how was I able to avoid the "um, I think this one is yours... No, wait it's this one." that all-too-frequently follows a return from the bar? The answer will amaze and astound you: While waiting for my change, for sub-conscious reasons unknown to me, I re-arranged the drinks sitting in a line on the bar into alphabetical order. Yep. Alphabetical order. Re-distributing the beer to their final destination became as easy as A-B-C. And, you know. The other letters too.

Here is a step-by-step guide to the Formalised System Of Beer Re-distribution. 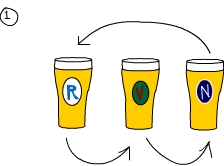 Step 1. As the bartender passes you the freshly poured beers, alphabetise them from left to right on bar. The naming conventions may cause some alphabetising issues, but as long as you're consistent, you'll be ok. 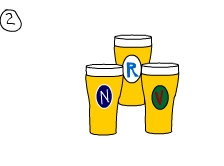 Step 2. Carry in a manner that is most logical to you. Clockwise, starting from the beer in my left hand seems most natural for me. That could be subject to regional and cultural differences.

Step 3. Upon reaching your destination, distribute them accordingly. Feel the burden lift from your shoulders as you confidently dole out the beers.

The benefits to society are far-reaching. It ensures you don't accidentally give a designated driver a full strength beer leaving you stuck with an icky light beer. And as you can see, the genius lies in the system's simplicity: the alphabet is one of the last things alcohol erases from your short-term memory.

The system is free to use, though royalty payments are owed in the form of one beer per time you see me at the pub. So go forth and alphabetise for a hassle-free drinking experience.

This was written by Mr Speaker. Posted on at 8:09 pm. Filed under Pop, Wide world. Bookmark the permalink. Follow comments here with the RSS feed. Trackbacks are closed, but you can post a comment.