Terrorism: Are we paranoid enough? 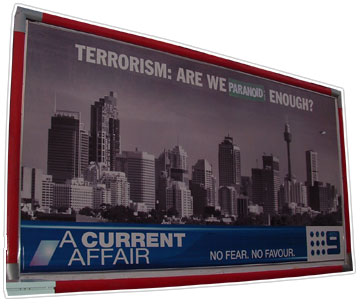 Channel 9 - No Fear, No Favour. Tonight - "Terrorism. Are we doing enough?"...For those not old enough to remember, the world at the beginning of the new millennium was a joyous, peaceful place. Children danced in the street singing and smiling. World leaders came together in harmony to organise tree planting operations and beach side barbeques. Big Brother delighted us all in it's first season.

But all that was to change... forever. One sunny September day, I forget which one precisely, the metaphorical towers of global happiness and goodwill passed away and turned over it's inheritance to it's evil next-of-kin.

Dark clouds blackened the skies. Evilness emerged from the darkness. A mist of fear consumed those of impure heart. All television programming was replaced with "reality shows".

...Cut back to the present day. The reclusive citizens of the globe have degenerated into huddled masses of confusion. It has become nearly impossible to know who is one-of-them. All is in danger of being lost. To quote, someone, "We need help - like quick - on the double. Have pity on the city 'cause man it's in trouble."

Thankfully, some heros do step away from the crowd and, like lollipop ladies of justice, they protect us from the on-coming dangers of international terrorism.

Channel 9 is doing its bit... "Do you know your neighbours? Could a terrorist be living in your own backyard? A report no Australian can afford to miss". Well, I made that up really. But channel 9's heart isn't really in it anyway - just some good old T.V. desperation to try and stopped getting it's arse kicked by Today Tonight. (Hey Kerry, I'll give you a hint... It's Ray - he's a dickhead! And if you need some better "journalists" give me a yell - I could make your average digger spit blood, and I don't waste valuable resources on checking "sources", or investigating "leads", or "proof-reading")

Luckily, though, the Government truly does care for us, and has taken steps to protect our safety. First of all, seal up all the bins, 'cause someone could put a bomb in there. Next, put up some posters telling people that there could be bombs in the bin. That oughta do it. Here's what the signs tell you, incase you want to print it out and stick it on the toilet door:

Terrorists rely on surprise, so there's no definitive list, however local and overseas experience has given us some possible warning signs to look out for. Examples include:

If you see anything suspicious call the 24-hour National Security Hotline on 1800 123 400. Our trained operators take every call seriously and you can remain anonymous. Remember, every piece of information helps.

This was written by Mr Speaker. Posted on at 10:04 pm. Filed under Wide world. Bookmark the permalink. Follow comments here with the RSS feed. Post a comment or leave a trackback.