The first ATMs in Australia (as remembered by me) had a display that consisted of 2 lines of orange monochrome LEDs concealed in a black plastic contraption that the customer was required to adjust to the correct eye level in order to read.

The ATM User Interface Development in the last 10 years has been astounding. Yesteryear's ATM's were confusing and ugly. Today they are confusing and gawdy. Usability experts have apparently only just begun to dip their feet into the fun filled arena of ATM development...

...Then emerged a new breed of video based instructional ATMs. Circa 1990. A Donkey Kong Game and Watch inspired machine that kept the customer awake by requiring user input on both the top and bottom input areas. Added entertainment was provided by onscreen options that line up with the selection buttons only if your are exactly 4 foot 11 and a half inches tall. 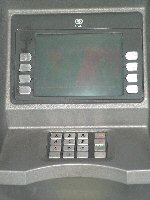 Now if you thought 2 sets of input controls were confusing (which I'm sure you didn't), wait till you try the ATM of the future! Today! Welcome to the dynamic field of User Interface Withdraw-o-tainment.

An average transaction may take up to 45 seconds - far longer than most cash machine user's attention span, and an awful waste of valuable time. Thankfully that problem will soon be one of the forgotten past as modern society prepares to unleash upon us Full Screen Video ATMs.

No doubt they will provide timely and relevant news of current world events, or local bake sales and in general aid our lives in ways that will leave us wondering how our ansestors got buy with just 4 colours.

Interestingly, these machines are made by Diebold - a company that has recently gained infamousy as "The face of modern ballot tampering" in the US. Though perhaps you should not ascribe to malice what can be explained by stupidity: Diebold's ATMs were also the first in the world to get hit by a worm, getting done by Nachi.

We can only hope that the cardboard ballot boxes and crappy BIC pens will be replaced this election with widescreen, dolby surround sound, wifi, multiplayer Microsoft X-BallotBoxs in an effort to aid Human User Interaction and dispense with voter boredom. And voter paper trails.

This was written by Mr Speaker. Posted on at 2:43 pm. Filed under Wide world. Bookmark the permalink. Follow comments here with the RSS feed. Post a comment or leave a trackback.