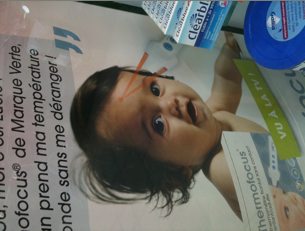 There are a couple of things to note: firstly, there appears to be laser beams shooting into or out of that small child's forehead. Secondly, the image is incorrectly rotated - as I snapped it in landscape mode.

Now, a baby being lasered in the head/shooting lasers from it's head is something that I'd want to share with others, so I quickly emailed it off to an interested party. Later, whilst checking my gmail I discovered that one of note-worthy aspects of the image had been corrected:

Still has lasers, but is correctly oriented! Google reads the EXIF data from the iPhone image and gives you a preview with the image correctly rotated. Isn't that nice! I've written to them asking if they can implement a baby-laser-removal algorithm, but I've yet to hear back from them.

This was written by Mr Speaker. Posted on at 3:30 am. Filed under Nerd. Bookmark the permalink. Follow comments here with the RSS feed. Trackbacks are closed, but you can post a comment.