Well, I did that.

Discovery One. CLAW OF PHOENIX 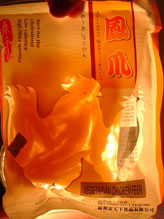 Discovery one was sitting right there in a pile of other random not-meat products, trying its best not to look as ludicrous as it obviously is. "Vegetarian Chicken Feen" it pronounced in large capital letters. A pack of liquid suspended, intricately detailed, gelatinous chicken feet were contained within. Although I needed no further reason to purchase the "feen", I also noted that this not-product was made of "konjac powder". I didn't know what that was, but it surely wasn't TVP or gluten - which could only be a good thing.

I grabbed by precious bag of "CLAW OF PHOENIX - Have no the cholesterol, Low calories, High fibre quality!" and rushed toward the checkout. But little did I know that before I would purchase my feen, a small box of flour from Indonesia would change my life forever... 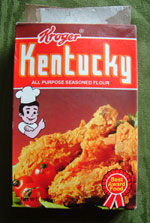 I don't know if it was that little chef guy, the crispy chicken or the "Special K" inspired logo that was particularly eye-catching, but it was a design ploy by Krogers that worked well. I immediately snatched up the box: Kroger® Kentucky All Purpose Seasoned Flour. It must take a brave company to blatantly violate so many copyrights, yet still bother registering their name as a trademark. And they didn't cite their sources for their claims of winning the "Best Award Food". Neither of those issues bothered me much, as it had just dawned on me the relationship of the two products I was now clutching in my hands....

Discovery Three: Discoveries One and Two.

The process only took a second. Fake chicken feet + Fake Kentucky Fried Chicken Seasoning = Something that I couldn't possibly comprehend from such a close distance. It was obvious and dazzling. It was tantalising and scary. I needed a lie down.

After a nap, I looked up the feen's main ingredient, Konjac powder. Konjac turns out to be a kind of yam. I've had it a lot in the form of konyaku from Japan. I opened the package and removed the feen. They are a sickening texture - all squishy and gristly.

Following the instructions on the side of Kroger's Kentucky, I de-yolked a couple of eggs and whipped up the whites.

Next the chicken feen where dipped in the egg whites, and covered generously (yet evenly) in Kroger's Kentucky Flour.

A plentiful amount of cooking oil was then heated to a point where it made that nice crackly-bubbly noise when you put stuff in it.

The tender chicken feen pieces were plunged into the scolding oil and rotated regularly until they turned a delightful golden-brown and looked pretty KFC-y.

A sprig of parsley was added as garnish for the photographs, then tossed away before the great eating of the feen.

Although unfair to judge KFC feen with the same yardstick as other fake meat products, due to its deep fried, super-alloy nature, I'll do it anyway.

Taste : -9- The Kroger Kentucky All Purpose Seasoned Flour gives a stirling effort at replicating the eleven herbs and spices of its namesake. Together with the strange super-absorbent konjac-based chicken feet make a startling and delicious combination.

Texture : -10- Cruchy on the outside, tender on the inside. The glutinous konjac feet give you something to get your teeth into, and the deep fried faux chicken skin really tops it off nicely.

Kentucky Fried Chicken Feet get 9.5/10 on the TVP-o-meter - gaining extra marks because I invented it, but losing half a point because they splashed oil on my new hoodie, rendering it unwearable.

This was written by Mr Speaker. Posted on at 9:10 am. Filed under Not products. Bookmark the permalink. Follow comments here with the RSS feed. Post a comment or leave a trackback.